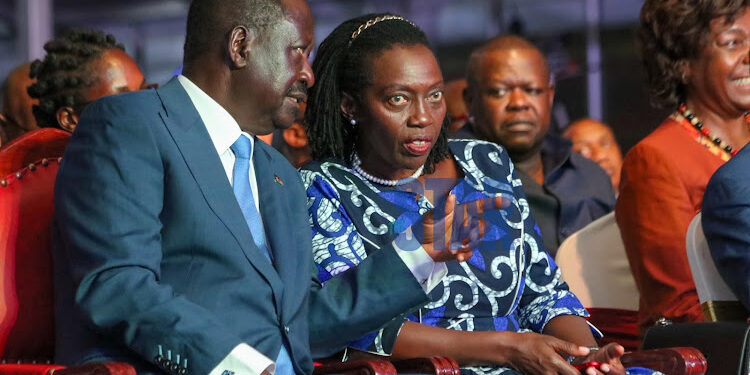 STATEMENT OF RT HON RAILA ODINGA ON KENYA ELECTIONS
AUGUST 16, 2022.
Good afternoon.  Today I want to address my fellow Kenyans and the international community about the 2022 Kenya elections and the role of the Independent Election and Boundaries Commission (IEBC), the body mandated by the Constitution and the law to conduct and manage elections.  On August 9, 2022, millions of Kenyans turned out in large numbers in an attempt to choose their leaders at the national, county, and local levels after long and generally peaceful campaigns.  But yesterday August 15, our budding democracy suffered a major setback.  As a result, Kenya faces a grave legal and political crisis as a result of the actions of Mr. Wafula Chebukati, the Chairperson of the IEBC.
The Constitution and our laws are clear about how the IEBC should conduct its business.  There is no more important role for the IEBC than the conduct, transmission, and tallying of the presidential election.  We are painfully aware of past political biases by the IEBC that plunged this country into its darkest chapter.  The terrible memories of the aftermath of the 2007 elections are still fresh in our minds.  In 2017, the Supreme Court of Kenya nullified the presidential election again because of the misconduct of the IEBC.  What we saw yesterday was a travesty and a blatant disregard of the Constitution and the laws of Kenya by Mr. Chebukati and a minority of IEBC Commissioners.
The law is clear on the role of the Chairperson of the IEBC.  The law does not vest in the Chairperson the powers of a dictator to rule the IEBC unilaterally.  The IEBC is structured as a democratic institution in which decisions must be taken either by consensus or by a vote of the majority.  The Chairperson and a tiny minority of commissioners have no legal authority to take weighty decisions and proclaim them as the rulings of the IEBC. The law on the IEBC provides that UNLESS A UNANIMOUS DECISION IS REACHED, A DECISION ON ANY MATTER BEFORE THE COMMISSION SHALL BE BY A MAJORITY OF THE MEMBERS PRESENT AND VOTING. In addition, the court of appeal in the Maina Kiai case, ruled WE ITERATE AS WE CONCLUDE THAT THERE IS NO DOUBT FROM THE ARCHITECTURE OF THE LAWS WE HAVE CONSIDERED THAT THE PEOPLE OF KENYA DID NOT INTEND TO VEST OR CONCENTRATE SUCH SWEEPING AND BOUNDLESS POWERS IN ONE INDIVIDUAL, THE CHAIRPERSON OF THE APPELLANT. That is why I, AZIMIO and the nation at large, were shocked yesterday to learn that Mr. Chebukati ALONE decided to pronounce himself on the supposed winner of the 2022 presidential elections.  We understand that ONLY Mr. Chebukati ALONE had access to the tally of the presidential vote.  He denied all the commissioners access to that information until he suddenly appeared before the commissioners in the late afternoon to present them with a fait accompli.
I understand that the commission had previously agreed on the tally of the Presidential results. But barely two hours before his announcement, Mr. Chebukati called a meeting of the IEBC and revealed to them the different results he was going to announce.  FOUR of the SEVEN protested Mr. Chebukati s actions. But Mr. Chebukati whose mind appeared made up did not entertain any discussion of the results, precipitating a walkout by a majority of the commissioners who promptly denounced the results at a press conference.  We know what happened next.  A majority of the commissioners walked out and held a press conference where they denounced the results.  Our view in Azimio is clear.  The figures announced by Mr. Chebukati are null and void and must be quashed by a court of law.  In our view, there is neither a legally and validly declared winner nor a President-Elect.  Mr. Chebukati’s announcement purporting to announce a winner is a NULLITY.  He acted with gross impunity and in total disregard of the Constitution and our laws.  He could have plunged our country into chaos had our supporters not exercised great restraint.  Such blatant acts of impunity can be a threat to the security of our country.  It is not up to us to decide whether Mr. Chebukati has committed an offense.  We leave that determination to the appropriate authorities.  For the avoidance of doubt, I want to repeat that we totally and without reservations reject the presidential results announced yesterday by Mr. Chebukati.
I want to commend our supporters for remaining calm and keeping the peace, and I urge them to continue to do so.  Let no one take the law into their own hands.  We are pursuing constitutional and lawful channels and processes to INVALIDATE Mr. Chebukati’s ILLEGAL and UNCONSTITUTIONAL pronouncement.  We are certain that justice will prevail.  I want to further commend the heroism of the FOUR commissioners – the majority of the IEBC – who stood up to the bullying and illegal conduct of Mr. Chebukati.  WE are proud of them and ask them not to fear anything.  Kenyans are with them.
Today I do not want to fully address our strategies going forward but suffice it to note that we will be pursuing ALL CONSTITUTIONAL AND LEGAL OPTIONS available to us.  We will do so because we regard the many flaws in the elections and the wrongs committed by IEBC as FATAL to the process and the outcome announced by Mr. Chebukati.  We urge Kenyans and the friends and partners of Kenya abroad to stand tall and be counted as we seek to advance the ideals of democracy and an open society that we have always stood for.  We will pursue justice for our supporters and for all Kenyans so that their choices are respected and honored.  MAY GOD BLESS YOU AND MAY GOD BLESS KENYA.
Share67Tweet42Send
Previous Post

TSC Blocks The Following List Of teachers from Future Employ